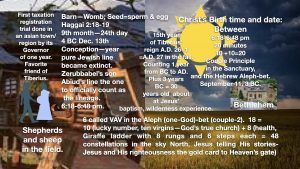 The second baby girl saves the first baby boy far away into the future.

The first baby boy when He was 33 1/2 years old thought about her in the pit under Caiaphas’ palace down in the guard room. Jesus spent part of the night, counts as one day in the belly of the earth, in the pit in pitch blackness praying His prayer recorded in Psalm 88. “My lover far into the future”. The scent of the expensive perfume Mary Magdalene poured onto His hair, and dripping onto His beard sustained Him through the crucifixion scenes. It was the symbolism of His Father in Heaven’s military reward for conquering the oracles in the cave beneath the cross guarded by two free-standing angels each 10 cubits high and 10 cubits wide from wing tip to wing tip. One angel’s wing tip touching the southern wall, and the other free standing angel’s wing tip touching the northern wall. Now there is only one left on earth, because the northern one went to heaven according to Mary Magdalene’s legends, and the Holy Scripture, Psalm 81. Two pillars in the front of the sanctuary represent the northern and southern kingdoms, Judah & Joseph. The maiden of the Song of Solomon steals back Mary Magdalene’s legends to be understood in the light of Jesus’ face.