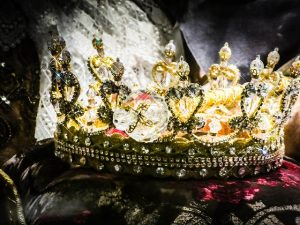 The eastern gate of the inner sanctuary of heaven highly likely in the Andromeda Galaxy, our closest neighbor, is within the corridor of the Mighty Hunter Orion’s sword in the sky.One can see Orion early morning or early evening in the eastern sky of the Northern Hemisphere on Planet Earth. The Prince comes to Solomon’s Porch at the eastern gate entrance to our solar system. It is at the royal new moon. The gates are always shut for the six working days of the week starting on the first day, Sunday, or Saturday night on the biblical calendar. The eastern gate of the ancient Jerusalem was always left open during holidays, and the people worshiped at the eastern gate on the Sabbath and the new moon. Prince David the successor offers His offering at the threshold of the gate. He received the universal cosmic throne when He ascended to heaven with the 500 resurrected saints after being on earth for 40 days after His resurrection Sunday morning, the first day of the week. The group take three days to travel to heaven through the eastern corridor of Orion. Then in heaven His inauguration for the universal throne lasts seven days up to Pentecost. But as the rightful heir of David’s throne He is still a Prince called David as the title name, because He first must marry the New Jerusalem in the most holy place, in other words possess the royal city in matrimony to a daughter of Solomon from earth according to the inheritance law of Moses. The gate in ancient times was left open until the evening. This is a prophecy of our day. Ezekiel’s third temple is the Ten Virgins, a true movement in the last days starting after A.D. 1798. God’s sky stories depict the Ten Virgins’ congregation. The offering was six lambs, (six handbreadths), and a Ram or the (seventh handbreadth) invisible hand in a royal cubit of 22 inches, making whatever it measures royal, royal families during the Judgment Hour. In the royal new moon a (white) Bullock was the sacrifice, six lambs, and one Ram. Prince David comes to the Eastern gate threshold of the four corners of the courtyard, and returns to the heavenly sanctuary eastward from the threshold. Prince David possesses or marries the New Jerusalem raised up from among the holy people symbolized by the number 25 called the Ten Virgins, the last day movement church, in the most holy place of the heavenly sanctuary. Ezekiel’s third temple was represented by the building 70 by 90 in back of the west side of Solomon’s Temple as the suburbs of the city growing out westward. When Prince David marries the royal city it will be a wheel within a wheel or the southern and northern kingdoms combined into one capital city, the city of Prince David, successor and descendant of King David buried in Jerusalem to this day.