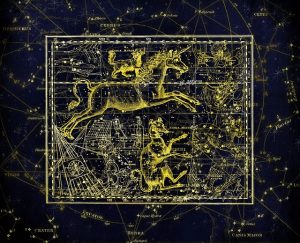 The star constellations interlink with the Old Hebrew Mishnaic and the Greek alphabet in their meanings. The “row of stones {pool of water{ at the mouth of the river” is where the Copper Scroll translates that you {who} will obtain 60 talents of silver, and two talents of gold. You will find 14 talents {seven & seven; on the lineage list made up of increments of 14 in Matthew chapter one; Jesus as the 13th slot when cut off from His descendants} of silver in the “pillar” on the northern side of the big cistern in the Hill of Kohlit. SK {Greek alphabet letters inserted}. Remember that 13 talents were hidden under the Trap Door leading to the northern road. The 60 valiant men are holding swords of truth on their right thighs ready to do battle for the King’s interests, His wedding processional in the Song of Solomon chapter three. Another small flagon has been received today to comfort and sustain: the Procyon pups or three kids are riding on the back of the Unicorn in the photo above as shown in the moon. Remember the 48 constellations tell the King’s stories with the stars that He created and placed in the sky with Aramaic names describing the stories.