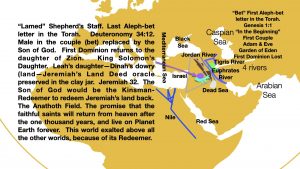 Adam gave up his rulership of Planet earth, the only created world by God to do so.

Satan took over and usurped the spot. But Jesus Christ as a team member in the Godhead came down to earth to die on the cross for our sins, so that we could inherit the inheritance of Jesus with Him. That is how our one Ghetto world could be exalted above all the other created worlds. Don’t miss the ride on the cloud chariot to heaven at the Second Coming of Jesus. Jesus earned the right to be the Second Adam. His Father is in heaven. His father is not Adam. That is how He can be the ruler of Planet Earth in place of the first created Adam, because Adam deliberately sinned to keep Eve. Eve was gullible and did not sin deliberately, and kept her spot. That is how her position still exists today. She was forgiven and could move forward as the mother of created human beings after her. Only the woman can compete for the Second Eve position through the sprinkled blood of the Lamb. It is the righteousness of Jesus, His sinless life that we can accept for our very own record on our Judgment Day that a Second Eve could even exist. The cubit used in the Wilderness Tabernacle of Moses was the short cubit, 18 inches, the measurement from the elbow to the middle finger of a woman’s arm. Every time I turn around the word “couple” in the Holy Scripture flashes in front of my face! The sanctuary featured the menstruation blood flow of the women symbolizing sin, Eve’s forgiven sin and preservation of her spot! The foundation of the Tabernacle is a royal cubit, 23 1/2 inches, the measurement from the elbow to the middle finger of the arm of Jesus. That was the measurement of the hole drilled in the moveable rock where the cross of Christ was plunked down into. So now we can understand how the influence of women can exceed that of the men today as prophecy tells us. It is true that women can enter a home more easily than the men, because of the territorial nature of men. Women can reach the whole extended family through the women in the homes, and save whole families! Go for it women of the world! Make other families vibrant and healthy, happy, and holy, because you extended a helping hand to help them have what you have too! God loves everyone, each as if they were the only person in the world alive at the moment! It is because He is God, the one God in the universe that never had a beginning, but has always existed is supernatural and all powerful, a massive force in the center of the whole universe, who loves us beyond our imagination. Praise the Lord! Saying that makes God feel like singing!