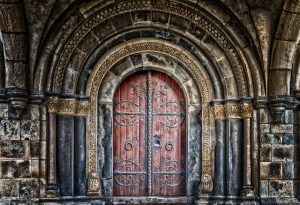 One must put on 3D glasses to see this Trap Door hidden underneath Jerusalem in an intricate cave system. First, we must understand the difference between a metaphor or allegory and reality.In the Old and the New Testaments of the Holy and sacred Scripture, the marriage relation is employed to represent the tender and sacred union that exists between the King of kings and His people. This shows that when He is called the Bridegroom, and the church the bride, it is only an allegory, not a reality as the City is. The lineage of David from Adam to Joseph and Mary is “reality” recorded in the Scripture in two places. My family, according to our Coat of Arms in reality come from Solomon’s Royal line. Yes, people exist today who are blood half brothers and sisters to the King of kings through His mother Mary, and her daughters by Joseph. The Holy City speaks as the bride with the Spirit in the wedding reception invitation to the whole wide world, and is dressed as a bride for her wedding. The Holy City is reality and a real tangible city that will be brought to earth to settle on the Mount of Olives. We are described as a city set on a hill that cannot be hidden. Matthew 7:14. Each one of God’s people is a city. Ezekiel’s temple is the Ten Virgins, the true church in the last days coming into existence after A.D. 1798. One gate measures 1500 as one city, one tribe of Jacob also called “spiritual Jews” with the royal lineage of David among them, in one of the bridesmaids, one girl, for the sake of David, a literal promise to be literally fulfilled in the last days. One gate, one person, has the measurement of the King of kings, 144 cubits or 12 tribes times 12 apostles as its foundation and faith. The Trap Door leads into the tunnel that will show the way to the cosmos palace through the corridor in the sword of Orion east. Whether you live in the United States or are visiting Jerusalem, Orion the Hunter can be found in the east just above the horizon.