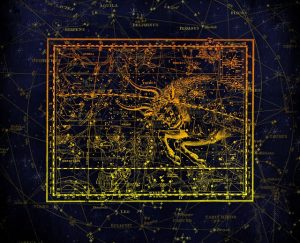 Look at the picture closely. Can you see the right horn of Taurus the Bullock as the Firstborn Ephraim from Joseph’s House touching the left foot of the Charioteer overhead whose back actually faces us from the sky?The tribe of Ephraim was located on the left west side of the Camp of Israel situated around the sanctuary. The Charioteer has the she-goat and her three kids on His right shoulder. The left horn of Taurus the Bullock is the she-cow of Manasseh, located in the middle of the west side of the camp. The Ark of the Covenant had the same compass reading as the layout of the Camp of Israel. The land of Manos is also laid out the same as the Ark, as also the city of Jerusalem. The Pleiades wraps around the left horn of Manasseh called the seven sisters, and one sister, Alcor, is heading for the cosmos palace in the northern section of the sky. The American Native Indians expect the White Bullock to show up in the last days heralding the soon coming return of the King to get His saints from earth. The White Bullock rounds up His people from all corners of the earth from all nations with no respecter of persons with His two horns of Ephraim and Manasseh of the House of Joseph. The tribe of Joseph with its double portions has the black gold stone, which is featured on the western side of the land of Manos. The Queen’s Mausoleum is also on the west side, and the small opening is from the west into Matia’s Courtyard. There is that other valley to consider as well. Things run south to north.