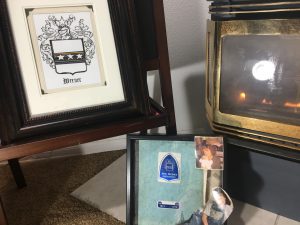 This Royal Coat of Arms is authentic and rare as it is one of its kind found in the archives of Germany. Possible that it was created by Joannes Werner, a German astronomer who wrote a treatise on the first book of Ptolemy’s “Geography”, also several mathematical works. (1468).He would have had the knowledge needed to create such a Royal Coat of Arms. The two branches and two plumes symbolize two tribes of literal Israel. The four stars I believe include four firstborns. Dinah had her inheritance as the 13th tribe through her daughter Asenath, wife of Joseph, and grandson Manasseh. The double portions of the inheritance comes through the firstborn. Asenath was adopted by Potipherah Prince of On and prince son of Ishmael who was Abraham’s firstborn. (more). Keturah (Hagar) was almost certain to be the daughter of the Pharaoh of Egypt given to Abraham to appease his God. Thus a double double portion from Ishmael and Judah who raked in Joseph’s house and Judah’s house. Gilead meaning “Springs” and the “birthright double blessings” of Rachel and Leah, the two Jewish candles. Here is where the four Enoch’s in our day come onto the scene also as the four stars on the Royal Coat of Arms. Jewish weddings feature the four firstborns as the four pillars of the Royal carriage or litter taking her to the groom’s house. So you see what is at stake here for Ishmael’s offspring and Judah’s. Both have a stake in the Gentile woman, the lucky one. The Royal Coat of Arms is within a family that is also within the Seventh-Adventist movement since A.D. 1883. This Royal Coat of Arms has been on the Werner family lineage book for years and no one noticed. That is how we survived everything. The devil didn’t know who to wipe out, the Huguenots who harbored Jews or the Jews themselves. Then boatloads of Jews were shipped across the Rhône River to Germany settling in the Rhineland where Anne Frank’s family lived. Martin Luther’s message of Jesus turned our family in the Dark Ages into Lutherans. The Knights Templars discovered Solomon’s secret about the women in his line, but could not reveal that they were nine Jews. They discovered the Holy Grail as the blood of the Savior for their sins and that they could go to Christ themselves. The legend of Mary Magdalene’s awareness of a woman to come in the line of Solomon fixed itself to her legend. The Savoir must have taught her His star stories.