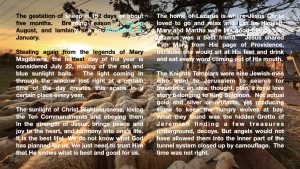 They found a map to Jeremiah’s Grotto.

The map outlined the royal love story with the temple treasures hidden in a cave underneath Jerusalem. No wonder they chose to live in King Solomon’s horse barn underground! The entrance was on the south side of the Temple Mount on the left side. I walked the same stairs that Jesus walked long ago. They steps were uncovered with excavation.

What I learned in taking a good look at the legends was that Mary Magdalene was introducing us to Psalm 88, the prayer of Jesus in the pit under the palace of Caiaphas, and that it was the righteousness of the life of Jesus that she accepted with her whole heart, mind, and soul. Mary became the most devoted disciple, first to everything during the crucifixion week. She understood more than the other disciples, because of prejudice, engrained culture, and veiled eyes. If only they had prayed with Jesus in the Garden of Gethsemene, they would have been spared utter grief and discouragement. It was a woman who helped them through it by her faith and devotion to Jesus Christ. She was thrilled to see Jesus in the Garden Tomb, and never let go of what Jesus gifted to her.