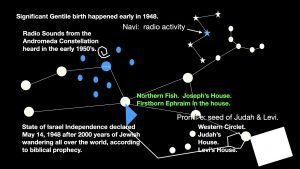 Luke 21:24—Jerusalem in AD 70 was destroyed by the Roman army led by its General.

The Jewish nation fell in their rejection of Jesus Christ of Nazareth, the Messiah anointed AD 27, 15th year of Tiberius emperor of Rome. Yet, a faithful elect accepted Jesus as their Messiah born a baby in the manger, growing up as a youth in Nazareth, and His ministry doing loving service to all mankind, culminating on the cross dying for our sins, He the sinless God and also a whole man born of Mary. The wandering of the Jewish people lasted 2000 years, then a nation was born overnight fulfilling Luke 21:24, THE TIMES OF THE GENTILES FULFILLED. THE RIVER EUPHRATES DRIED UP AND THE HIGHWAY FOR THE KING OF KINGS (ONE KINGDOM WITH NORTHERN AND SOUTHERN KINGDOMS COMBINED: JEW and GENTILE crowns combined) PREPARED FOR THE KING OF THE UNIVERSE to sit on David’s throne in heaven at THE SECOND COMING of Jesus. The new kingdom will be set up the cloud that comes out of Orion’s tunnel TO RESCUE HIS SAINTS FROM EARTH. They live in heaven FOR ONE THOUSAND YEARS helping God to judge the wicked, all dead on earth with only Satan and his angels alive to contemplate their own sins and consequences of those sins with no one to tempt. THEN THE New Jerusalem AND THE SAINTS are MOVED BACK TO EARTH, THE CITY AS THE CAPITAL OF THE ENTIRE UNIVERSE FOREVER ON PLANET EARTH MADE NEW. Planet Earth is exalted above all the other worlds forever, because God lives there with the earthlings forever as the God–man. The Ten Virgins, the true church houses the Firstborn Ephraim of Jacob as its head, and the 12 spiritual tribes and 12 literal tribes of the Old Testament, the Spirit of Prophecy, and life forever.