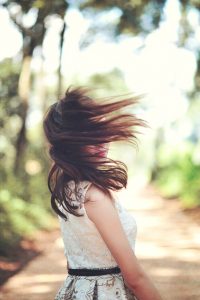 Devorah or Deborah, the nurse given to Rebekah by her father, means in Hebrew “Bee”. When the Bee accepts the invitation to be the one and only Queen Bee hand-picked by the King’s preference, and she prefers him above all others, then that is the moment her voluptuous body enlargesto accommodate the twin towers of David’s Tabernacle. But it doesn’t happen until she recognizes the meaning of the Jewish womens’ name describing her. Not only that, but she discerns how the King looks at her, and what He thinks about her sexually. He reveals His sexual attraction to her by her physical feminine characteristics in the names done by inspiration. It blows her mind away! Never has she realized the actual desire in His heart until her study of these names. It draws her like a magnet. Her heart melts and she is won over to Him on the spot. As the breeze sculpts her hair, her back to Him and the thoughts culminating in her mind, she looks back at Him. She isn’t married yet, but signs the agreement of the Espousals given to the children of Israel at Mount Sinai of Arabia with a pen. Then it is that she pleases the King of kings, Songs 8:10. There exudes from a queen bee a substance, the queen bee substance spreads throughout the hive causing all the workers to hum in unity and melodiously as they work. When the queen bee is removed from the hive, there is no longer that substance that causes the very sweet honey to be produced in an orderly fashion. The worker bees stir up a roar in the hive, because they no longer receive the secret substance from her, and they are in disarray.