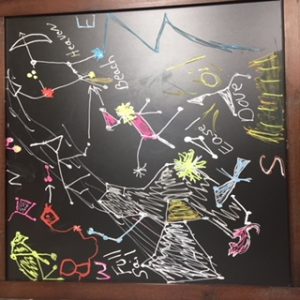 The chalk drawing above by C.L. Rockney is patterned after H. A. Rey’s constellations. The 48 constellations include the 12 Zodiac constellations along the sun’s ecliptic path in the sky, and each of the 12 have three decansor constellations that describe and identify the meaning of each of the 12 Zodiac constellations. The third decan of the “crab” or “seed of Abraham” is the Argo ship or another name as Sirius, the Mighty Hunter Orion’s best friend, the great mama dog, loyal, brave, and guarding the King’s interests. Dogs are viewed as of low degree, which also describes the Andromeda widow. The crab reveals in astronomy a busy beehive activity inside it: aliveness. The two electric claws protect the activity being passed from one woman’s womb to the next in line. The other two decans are the “little bear” and the “great mama bear”, which describe the Ten Virgins by their tails that show up in the last days. Each one of these decans is a woman. The “Crab” is the womb of the woman claimed by the Lion of Judah, and chased after by the serpent. The three women are one woman, whose womb holds the seeds of Abraham from Virgo the Virgin who is also along the sun’s ecliptic path. The ship Argo with the Sirius mama dog as its figurehead revealing yet another meaning that it is her ship heading for the beach. It is in the Milky White Way along with the Unicorn, and the Lawgiver’s gavel. Sirius, the mama dog, has pups, thus she is a widow as Andromeda is a widow known by the Arabic world. Sirius is drawing the ship Argo by the stern with her tail, bringing in the ship to beach, which is the corridor to heaven in the sword of Orion. The tail as does the great bear’s tail symbolizes the end of the line, the last days, our modern day when the ship is beached. The Dove is the Holy Spirit in God’s stories in the sky, and the barrels and barrels of the warehouse oil from heaven comes through this easel with its chalk drawing of the ship, the third decan of the “Crab”. The serpent is after the pups, the young people who are being raised among the Ten Virgins, the true church, the apple of God’s eye. More specifically the pups are the children of Sirius, who she is saving by her life boat bringing them to beach with silver and gold framed as a picture. The Mighty Hunter has the Ram’s golden fleece called the “Straight and Narrow Testimony of the Lamb”. The sail is full and catching the wind as it heads for the beach backwards as this is an uncommon path, and unusual story such has never ever before been told in its full reality. The flying fish at the hull of the ship is the Northern Fish saving Andromeda, as the Prince of David’s house. The Flying Fish is the power that makes the ship go speedily to shore, beached, but not at any port on earth. The ship is flying through the sky with its stories heading for the corridor of heaven, the beach. The oil of the Holy Spirit as the Dove pours its golden stream earthward. The river coming out of the knee of the Mighty Hunter shows that this story is pivotal in the plan of salvation for earthlings. “Life” is what matters in the story, life forever, never ending when the “Tree of Life” is reached in heaven and eaten. The top of the drawing is north. The compass at the stern or back of the boat is higher than the sail in the north sides of the drawing. The north, which is heaven, is the binnacle that houses the compass, the most essential navigational instrument. It reaches 180 feet from the brightest star in the sky, Canopus, at the Hull or bottom of the boat to the compass, and this comes to the middle of the Driver’s body of the boat who lives up in heaven in the north country, God. The ship Argo heads east to the Mighty Hunter Orion’s sword and its corridor out of earth’s solar system and into the next galaxy, heaven, our next door neighbor. The Unicorn is present because of the serpent heading straight for the young people among the Ten Virgins. Its tail as the story happens in the last days, points to the serpent. The right back hoof ready to step on the head of the serpent, and its right front hoof points straight to the corridor in Orion’s sword on the Hunter’s right thigh ready for the battle between Christ and Satan. The “easel” is just below Canopus, and close to the Dove with its barrels and barrels of oil pouring to earth in a stream from heaven, the Waterbearer’s stream. The “easel” has been telling the sky stories of the King and about the king and the maiden He chooses from earth, and what it does for earthlings, making them the same stature as the King of kings, 144 cubits by their belief. This is called in Revelation 14:1-5 as “following the Lamb wherever He goes”. Abraham did when God promised Him a literal fulfillment of his seeds to be as numberless as the stars, the sands along the seashore, and the dust of earth, and Abraham was accounted as righteous and blessed. Those who cursed him were cursed. Those who blessed Abraham were blessed, and so it is today regarding the “blessing of Abraham”. Believe, claim, and thank the Lord for already answering your request, and live. This story is especially for the young people, who would like to be royalty in reality and most certainly can be princes and princesses by believing in the blessing of Abraham.