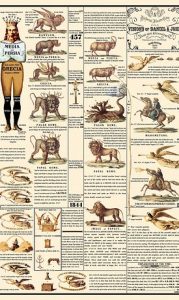 The second 1850 chart based on the 1843 Millerite chart was expanded, designed and published by O. Nichols, also through inspiration from God. The two charts fulfilled the prophecy of Habakkuk 2:1-4as being the tablets, plural, that was to be studied and shared with the world as the Three Angels’ messages in Revelation 14. This was in the context of October 22, 1844, the Day of Atonement for that year as the fulfillment of Daniel 8:14 when the sanctuary in heaven would be cleansed. It was the Investigative Judgment with Christ as the High Priest, the Judge, and the Defending Lawyer for each person on earth dead or alive calling it the Judgment Day for each person when their name is called and the books of heaven, their records kept by the two recording angels as their witnesses, opened and examined. When we accept the sinless life of Jesus with confession of sins of unbelief and the treatment of others as its basis, the only life examined is the sinless life of Jesus Christ of Nazareth claimed for their very own.”

The following inspired quotes pertain to the two charts of 1843 and 1850 shared here.

“Monday we returned to Dorchester where our dear Brother Nichols and family live. There in the night God gave me a very interesting vision, the most of which you will see in the paper. God shewed me the necessity of getting out a chart. I saw it was needed and that the truth made plain upon tables would effect much and would cause souls to come to the knowledge of the truth. (Letter 26, 1850)

“Our next Conference was in Fairhaven. Brother Bates and wife were present. It was quite a good meeting. On our return to Brother Nichols’, the Lord gave me a vision and shewed me that the truth must be made plain upon tables and it would cause many to decide for the truth by the three angels’ messages with the two former being made plain upon tables.” (Letter 28, 1850)

“I saw that God was in the publishment of the chart by Brother Nichols. I saw that there was a prophecy of this chart in the Bible, and if this chart is designed for God’s people, if it sufficient for one it is for another, and if one needed a new chart painted on a larger scale, all needed it just as much.” (Manuscript 1, June 2, 1853)

“Hab 2:1 I will stand upon my watch, and set me upon the tower, and will watch to see what he will say unto me, and what I shall answer when I am reproved. Hab 2:2 And the Lord answered me, and said, Write the vision, and make it plain upon tables, that he may run that readeth it. Hab 2:3 For the vision is yet for an appointed time, but at the end it shall speak, and not lie: though it tarry, wait for it; because it will surely come, it will not tarry. Hab 2:4 Behold, his soul which is lifted up is not upright in him: but the just shall live by his faith.”