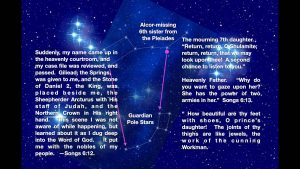 Saturday, December 25, 2004 I was at home by the national forest

in my cabin studying the word of God Sabbath afternoon like I had never done before discovering amazing things. Then, I was not aware that I had passed my Judgment Day according to Zechariah 3 and according to the things I was discovering that Sabbath, hitting the hidden bridal trail. Yet, I was unaware that I was already in the chariot of my Noble people from ancient times September 24-25, the Day of Atonement for 2004. The peace that passes all understanding became mine, but a continual battle choosing the right over evil. It took from about 5 pm when I stopped studying, and got ready for bed until 11 pm PST when the Tsunami hit in Indonesia (MGT). The devil thought I was dead spiritually from the sunbathing “Adhil” experience, and so left me with lesser evil angels, and he went off to Indonesia to the island of “sex trafficking” when the evil dark knight received the earth-shaking news–someone on earth struck the bride-trail in the United States that he tried so hard for centuries to cover up forever. He was far away, and he can only be in one place at one time. Lucky for me! I went to sleep in sweet dreamland, never aware of anything, waking up and writing what I was learning down on paper.