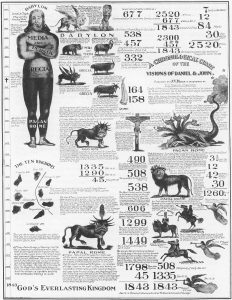 The 1843 Millerite Chart above designed by Charles Fitch, inspired by God. This was the time when the global Advent movement preached the second coming of Christ in 1843, but Christ did not come.They restudied the matter and once again set a date for the spring of 1844 having caught the mistake that there is a year between one B.C. and A.D. one, and failed to see that King Artaxerxes of the Medo-Persian Empire came to the throne in the fall of 1844 instead of the usual spring for the Gentile nation. His older brother was killed along with King Xerxes. Queen Vashti was banished and pregnant with Artaxerxes. So apparently, an unknown pregnancy when she was banished, probably saving his life. The one hidden mistake in their calculations, not the chart’s fault, that was covered by the hand of God for a purpose, to test the people and their hearts, did not surface until the delay when Christ did not return the spring of 1844. The Ottoman Empire was predicted in the Holy Scripture Revelation 9:12 for an exact date, August 11, 1840, and it happened on that very day. The four powers took control, and the Ottoman Empire came under their jurisdiction from that point on. Thus the way was being prepared for the modern Sovereign State of Israel as we know it today. The United States Embassy now set up in eastern Jerusalem as the capital of the nation of Israel, fully established as the Word of God predicted the return to Israel by the Jewish people. The reason is set forth in the Scripture that the return is to honor the name of God, and not that of the Jew. It is the inheritance Law of Moses that is still active. You can read about the fulfillment of the prophecy of Revelation 9:12 in Uriah Smith’s Daniel & Revelation volume, the study of this subject on my Youtube channel. The popular view in that day was that Daniel 8:14 was talking about the cleansing of earth as the sanctuary. But the “Great Disappointment” was clearly presented in the biblical book of Hebrews in the New Testament and the Old Testament, the sanctuary referred to in Daniel 8:14 was actually in the heavenly sanctuary, the earthly Wilderness Tabernacle of Moses as its shadow of heavenly things.

The 1843 chart above is in direct fulfillment of Habakkuk 2:1-4, the chart symbolized by the words “made plain upon tablets” that those who hear may run with it. This matches the Song of Solomon in chapter one when the maidens run to share, following the Lamb wherever He goes by faith in the promise made to Abraham. The 2520 years is exciting to understand because it is about the King’s
wedding. The seven times for the wickedness of the kingdom of Judah is figured out by multiplying seven times 12 months, which makes 84 months. Then times 84 months by the biblical 30 days per month and it equals 2520 years until the seven times is up. Subtract B.C. 677 when Manasseh was captured by the king is Assyria from 2520 and we get 1843. Then add one year for one B.C. to A.D. one on the calendar and the end of the royal king line ends in the Most Holy Place where the successor to King David’s throne works on our behalf.

“Their faith was greatly strengthened by the direct and forcible application of those scriptures which set forth a tarrying time. As early as 1842, the Spirit of God had moved upon Charles Fitch to devise the prophetic chart, which was generally regarded by Adventists as a fulfillment of the command given by the prophet Habakkuk, “to write the vision and make it plain upon tables.” No one, however, then saw the tarrying time, which was brought to view in the same prophecy. After the disappointment, the full meaning of this scripture became apparent. Thus speaks the prophet: ‘Write the vision, and make it plain upon tables, that he may run that readeth it. For the vision is yet for an appointed time {October 22, 1844}, but at the end it shall speak, and not lie: though it tarry, wait for it; because it will surely come, it will not tarry.” [Habakkuk 2:2, 3.] {4SP 241.2}

“I have seen that the 1843 chart was directed by the hand of the Lord, and that it should not be altered; that the figures were as He wanted them; that His hand was over and hid a mistake in some of the figures, so that none could see it, until His hand was removed.” {EW 74.1}

“There was a single prophetic mistake on the chart which was there by the providence (hand) of God. The mistake was in the calculation of the prophetic time periods that led to 1843. After the disappointment in the Spring of 1844, the mistake was explained and the prophetic periods were then seen to point to October 22, 1844.”

“I saw the people of God joyful in expectation, looking for their Lord. But God designed to prove them. His hand covered a mistake in the reckoning of the prophetic periods. Those who were looking for their Lord did not discover this mistake, and the most learned men who opposed the time also failed to see it. God designed that His people should meet with a disappointment. The time passed, and those who had looked with joyful expectation for their Saviour were sad and disheartened, while those who had not loved the appearing of Jesus, but embraced the message through fear, were pleased that He did not come at the time of expectation. Their profession had not affected the heart and purified the life. The passing of the time was well calculated to reveal such hearts. They were the first to turn and ridicule the sorrowful, disappointed ones who really loved the appearing of their Savior. I saw the wisdom of God in proving His people and giving them a searching test to discover those who would shrink and turn back in the hour of trial.” {EW 235.3}

“Jesus and all the heavenly host looked with sympathy and love upon those who had with sweet expectation longed to see Him whom their souls loved. Angels were hovering around them, to sustain them in the hour of their trial. Those who had neglected to receive the heavenly message were left in darkness, and God’s anger was kindled against them, because they would not receive the light which He had sent them from heaven. Those faithful, disappointed ones, who could not understand why their Lord did not come, were not left in darkness. Again they were led to their Bibles to search the prophetic periods. The hand of the Lord was removed from the figures, and the mistake was explained. They saw that the prophetic periods reached to 1844, and that the same evidence which they had presented to show that the prophetic periods closed in 1843, proved that they would terminate in 1844.” {EW 236.1}