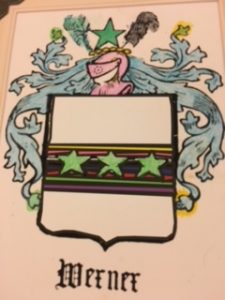 This Coat of Arms for the Werner family was preserved in an archive in Germany found by Adeline Werner Reimche. There is not another one like it, for it is extremely rare,and one of a kind for a good reason. It locates David’s Tabernacle with stunning and simple evidence. Notice the six agate stones lined up like sisters, the Pleiades in the sky called the Seven Sisters. The agates identify the tribe of Manasseh along with the thirteen stripes as the 13th tribe tracking back to Dinah, only daughter of Jacob among his twelve sons. The agate window in Isaiah 54 describes the widow as of the tribe of Manasseh. The lone star at the top is the seventh sister representing Achsaw, daughter of Caleb, son of Abiah daugther of Machir, who was the firstborn son of Manasseh, who was the firstborn son of Joseph, who was the son of Joseph. Abiah married Hezron, son of Phares, son of Judah, son of Jacob. Her inheritance went to the tribe of Judah, which included the split birthright blessing given to Manasseh by Jacob and Gilead, the Springs of Gilead via Ephraim and Manasseh. Abiah and firstborn Gilead, twins of Machir sat on Joseph’s knees Prime Minister of Egypt. The Spring on the right side of the lady warrior colored blue represented the birthright blessing of Ephraim, the heavenly Father’s Firstborn Ephraim out of Egypt. The Springs on the picture’s left symbolizes the springs or birthright blessing of the tribe of Manasseh. The two plumes at the top represent two tribes, the one on the picture’s right as Judah with the emerald coloring, and the black one on the left as Joseph. The Eagle’s three stars as shown in the sky flying towards the Swan represent the Firstborn Ephraim, God. The Shield is near the Eagle in the sky in the Milky White Way. The Lone Star at the top symbolizes Alcor last days/Achsa-Caleb’s only daughter/Shulamith of the Song of Solomon as the princess of Judah wearing a tiara. The Lone Star’s left leg points to the fourth star called Miklah meaning “queen”, fourth daughter of Zelophehad, who had the ten shares for their inheritance kept within the tribe of Manasseh by the five sisters of the Pleiades. Find Alcor in the sky September/October. The Coat of Arms reveals David’s Tabernacle with the two split birthright blessings brought back together within the Werner family belonging to Ephraim and Manasseh. Joseph brought out the twins between his knees to build a house for David as God promised. Jacob sees in vision as he physically cannot see, the seed of Joseph as one seed in marriage between the woman that receives the ten shares and split birthright blessing of Manasseh in the last days. He sees the Groom as the Firstborn Ephraim, Son of God and man in a house with the Upper and Nether (breasts and wombs of Joseph’s tribe). Judah as the southern kingdom reveals the northern and southern crowns within this Coat of Arms creating one house for David fulfilling the promise. This is an actual and real event happening right now in America. David’s Tabernacle is in America within a family.