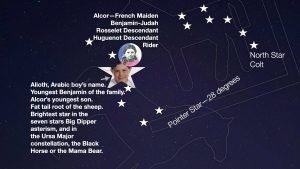 Evidence that God does know you before you were born

and He wrote His stories in the sky with the 48 constellations including the Black Horse mare, Alioth youngest son of Alcor of the Benjamin-Judah tribe. Benjamin was called the son of Jacob’s right hand. ALIOTH a star Arabic name, as most of the stars in the 48 constellations have Arabic names with Arabic meaning, is about a young boy growing up to be a young man whom the Lord has plans for him to do in helping others make it to heaven among the ten virgins, the true church. He is beyond the two stars pointing to the Thuban star in the dragon stretching past the Black Horse. He is next to his mother, the DESCENDANT. The two stars on the left side of the bucket or saddle are in apostasy and connecting to spiritualism and the religions that teach falsehood. The pointer stars are true and faithful, pointing to heaven, the North Star, symbolizing Jesus and the Word of God interpreted by the Holy Spirit and prayer.

Cyrus II the Great was the son of Cambyses I, who was the son of Cyrus I of Persia. Medo-Persia was the second empire named in Nebuchadnezzar’s dream of the great image, the arms and chest of silver: Daniel 2. Cyrus II was named in prophecy long before he was born. It amazed Cyrus II to read his own name in the Holy Scripture!

The prophecy given about 150 years before Cyrus was born, and Cyrus read it for himself, and believed. Isaiah 44:28; 45:1. (44:28) “That saith of Cyrus, He is My shepherd, and shall perform all My pleasure: even saying to Jerusalem, Thou shalt be built; and to the temple, Thy foundation shall be laid. (45:1) “Thus saith the Lord to His anointed, to Cyrus, whose right hand I have held, to subdue nations before him; and I will loose the loins of kings, to open before him the two leaved gates: and the gates shall not be shut.” The sister of Cyrus married Zerubbabel, Rhoda a Persian princess, and she gave birth to a son named Rhesa in the line of Nathan son of David, whose descendant was Jesus Christ of Nazareth.

The mare and her colt were tied up to the lintel of the door in the village of Bethany where the family of Lazarus lived near Jerusalem on the descent of the Mount of Olives. Jesus rode the colt with the mare close by.